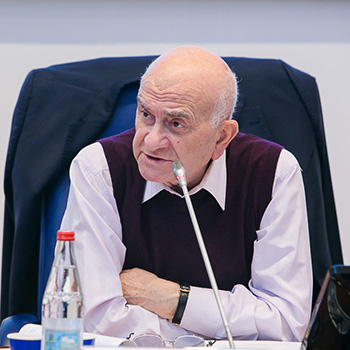 Evgeny Yasin, Academic Supervisor of the Higher School of Economics

At the time, there were no regular conferences that represented the Higher School of Economics, and as a growing university we had to create one so that everyone knew that HSE would be hosting such an event. So we immediately thought up the April Conference as a symbol of sorts.

The conference is an academic platform where academics can present on the results of their research. We unfortunately didn’t have the best results at first because we were still a very young university, like the economic sciences as a whole in Russia at the time. We weren’t strong enough to conduct work in the types of fields that prevailed in the global academic community. But there were also problems that concerned the ‘new Russia’ and economic reforms, and we agreed to start here and gradually improve the level of our research and publications in order to rise to the global level. This is why our event was first called the International Academic Conference ‘The Investment Climate and Prospects of Economic Growth of Russia.’ We were able to invite ministers, important entrepreneurs, and experts from the World Bank and International Monetary Fund. It was very interesting.

The conference always included fields connected with macroeconomics, as well as with the events taking place in Russia and the lessons we can glean from them. A traditional area of focus is labour market research, and a big priority is always education. Yaroslav Kuzminov and Alexander Tikhonov began working on problems in education reform back in 1997-1998, and this is considered to be our own special field, and we continue working on it.

The conference has always taken place in April, and it has been called the April Conference at least since the third year it was held. We ultimately decided to keep the name forever. For many years we held the conference the first week of April, but it became clear that a lot of academics, for example those from the United States, cannot visit during that time because of engagements at their home universities. But they are able to make the conference if it’s held a little later after April 11th. So this is around when we plan to continue hosting the conference. I had my own sort of celebration several years ago when Kenneth Arrow came to the conference. He’s a Nobel Laureate and one of the best-known economists in the world. He was around 90 years old at the time, but still agreed to present a paper.

We insist on the April Conference being socioeconomic in nature and only partly political. I don’t think the topics will expand much in the future, but we are going to work on strengthening the academic and international aspects of the conference.