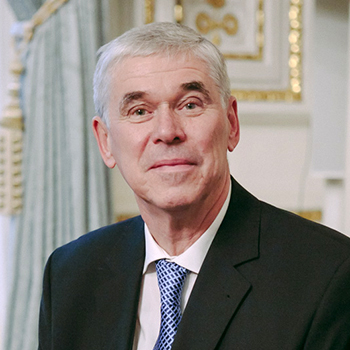 In the mid-1990s, I worked at Moscow State University (MSU) as the deputy dean of the economics faculty for international communications. A group of colleagues and I actively participated in the European educational project Tempus Tacis, which aimed to restructure economics education by creating a partnership with the London School of Economics (LSE), the Sorbonne, and Tilburg University. MSU carried out a lot of important work as part of this project: we translated textbooks, developed new courses, and participated in internships. But these were all separate types of activities, and I really wanted to make MSU’s economics programme recognised abroad, similar to the mathematics or physics programmes. In order to do this, we needed to build an academic reputation.

We got the idea of creating a faculty that would coexist alongside the large economics faculty, but learning would take place in a new and contemporary way. Our colleagues who also partnered with us on the project, particularly the LSE, liked the idea. We started preparing a plan, also known as a white paper, and met with our foreign colleagues at seminars to discuss what the economics faculty should look like, what its objectives and instruction methods would be, and how it would be run. When the plan was ready, we met to discuss the white paper with the academic council of the MSU economics faculty. But nothing worked out. MSU’s academic council didn’t approve of the idea, as they thought it might destroy the principles of a Soviet education. The previous dean wrote a special letter detailing this and describing why we mustn’t allow foreigners to select instructors. In other words, we had come to a bump in the road. I then turned to Sergei Dubinin, who was the head of the Russian Central Bank at the time, and he supported our idea. We talked everything over and decided to take the idea to the Higher School of Economics, understanding that this was an affiliated institution created by former MSU employees. People there were more similar in spirit. We talked the idea over with Yaroslav Kuzminov for a half hour and reached an agreement.

In March of 1997, HSE hosted a meeting with representatives from 20 banks, and some, but not all, supported our idea. I remember the day very well. The meeting ended and everyone left. I was extremely shaken up about the impending turn of events. I went up to Yasin and said, ‘Well Evgeny, what are we going to do? Maybe we’ll wait a year and look at the situation then?’ He nearly yelled at me, ‘What do you mean! Go, work! Have everything ready in a month!’ I’m really grateful to him for that.

After a month we created the framework, and Yaroslav Kuzminov himself sat behind the computer and worked out the first set of budgets. This was the LSE’s first (and as we later found out, only) 20-year project like this, and it was carried out there largely thanks to the support of officials, particularly Richard Layard. They really wanted to help Russia create a new university and new academic culture. No one forced them to and they didn’t get any money from it. For them, it was simple cost recovery throughout an academic partnership. It was an academic project, and an initiative that encompassed everyone from professors to university managers.

A little later it was time to admit students, which was difficult, but HSE helped us out with everything. It was 1997, and there was no Bologna Process whatsoever. And here they give you two diplomas and say a few incomprehensible words. We didn’t really know how to present ourselves in a way that didn’t look cheap. There were 37 people in the first class, and some of them didn’t know English. It was even more difficult as far as instructors were concerned. Our British colleagues (from the LSE) sat on the admissions board and acted like they would act when hiring teachers at the school in London. Sometimes the candidates that came to us weren’t always prepared to demonstrate their knowledge of a subject or even their knowledge of English. But we somehow managed to get together the necessary number of competent – by international standards – people and get to work.

From the first class we admitted, 13 made it to graduation. We were in a very difficult situation the first year due to a misunderstanding with our British colleagues. They insisted, ‘No special coaching, and no questions about how to pass an exam. Students should be captivated by economics!’ And we thought this was the correct approach. Then in the spring we realized that six months had passed and we still hadn’t started preparing our students specifically for the international exams that they had to take very soon, exams whose format differed from those at Russian universities. And it was a failure. Only 40% of our students passed mathematics the first year. We got a letter from our colleagues at the LSE saying that if there were similar results the second year, they wouldn’t be able to continue working with us anymore. We immediately had to implement some changes to our learning process and bring our domestic exams more in line with the format of international exams. On international exams, your answers to test questions aren’t as important as how you solve problems and work out cases. Gradually, our British colleagues helped us gain experience, and when the first 13 students graduated in 2001, we – and everyone around us – knew that a dual-diploma programme was possible.

Now, 20 years later, ICEF has around 1,000 students and more than 1,500 alumni of bachelor’s and master’s programmes who work in 88 cities in 35 countries around the globe.